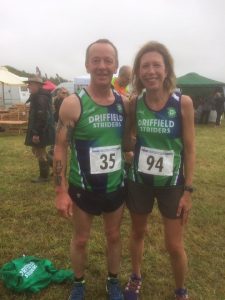 Congratulations to Zoe & Jazz, who won their respective age categories at the Yorkshire Wolds Half Marathon at Bishop Wilton on Saturday 15th July. Another pair of our illustrious bunch, who just keep on pushing themselves and continuing to win almost every time they enter a race! 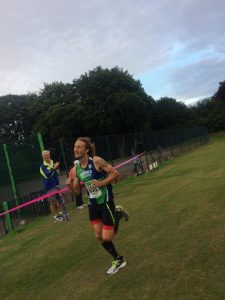 Wilson had another fine run at the Walkington 10k on Friday evening, finishing in 9th place from a field of 623 finishers. Another fantastic result for James who keeps on showing a clean pair of heels to the majority of local runners. James posted a very swift time of 36:54 on a particularly testing, hilly course. Next Strider home was Debbie Church who finished second in her age category with another great run to add to her impressive haul.

The perennial Andrew Boyes Followed in with a time of 46:30, tremendous for a man in the Autumn of his days (watch out for Andrew’s 60th Birthday soon. You wouldn’t put him a day over 59 would you?) Next Strider home was the ever improving Jason Pea with a fine time of 47:49. Completing the Striders contingent were Benita Boyes 53:09 and David Pudsey 61:20.

Mr David Gets Rinsed (in more ways than one!)

Driffield Strider David Parkin ran himself to a standstill to achieve his best ever 10K time on the hottest day of the year.
David was among thousands participating in the Hull (Jane Tomlinson) 10K. Such was the heat that marshalls and spectators sprayed runners with hosepipes.
Following his 39mins. 37 secs. finish, David said: “I never thought I would ever break 40 minutes and totally rinsed myself to do it today.
“A huge thank you to the 40 minute pacer who towed me in from two miles out and also to the First Aiders who looked after me at the end.”
David came second in his age group, as did his wife Zoe, who clocked 43.19. Other Striders taking part included Martin Stack (44.36), Jason Pea (50.06), Karen Falcus (60.09) and Vicky Webster (77.11).

The Wilson family enjoyed double success at Sunday’s Humber Half-Marathon.
Driffield Strider James set his fastest time for the distance (1hr.21mins.19secs), in finishing 14th overall, with daughter Abbie fourth girl out of 90 in the 2.5Km Fun Run.
The previous day Abbie had achieved a new personal best of 24.36 for the Sewerby 5K Parkrun.
Also celebrating was Vicky Webster, whose 2hrs.24mins.39secs was 17 minutes quicker than her previous best half-marathon.
She was among a Striders squad including Jazz Edeson (1.30.20), Martin Stack (1.39.41), Jason Pea (1.51.34), Karen Gordon (1.59.24) and Jo Hetherington (2.14.32).
The race attracted 1,840 runners and was won by Callum Elison (Roundhay Runners) in 1.12.16. Beth Pascall (Brisol and West) was first woman in 1.26.17. 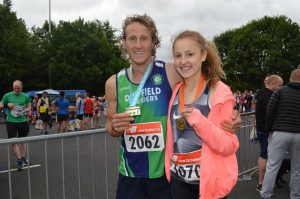 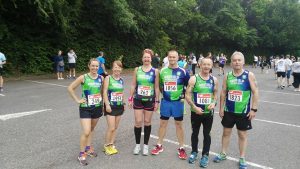